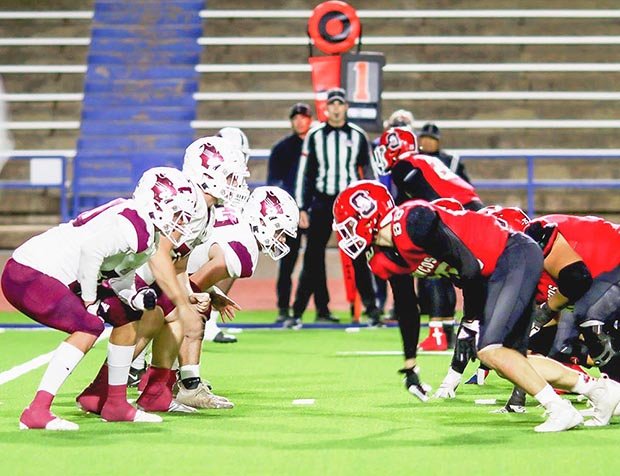 The Sonora Broncos varsity football team had their 2022 season come to a conclusion on Saturday night in San Angelo. The final score in the Region 1-2A Division 1 playoff game against the now 13-0 Hawley Bearcats was 57-26. 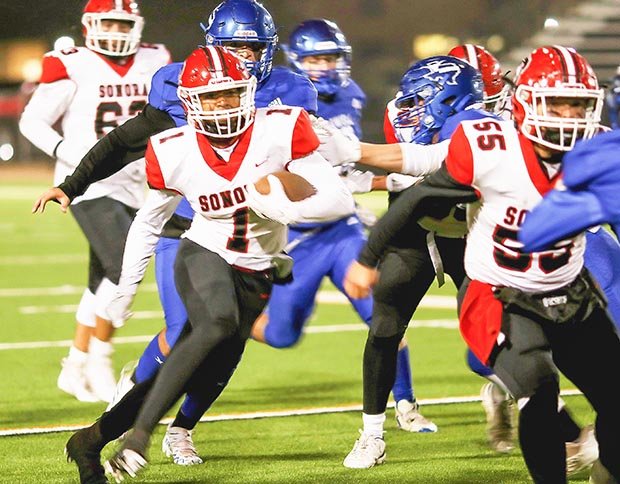 For the third consecutive week, Sonora’s opponent was picked to be the winner. Last week the Farwell Steers were picked as three to six point favorites. Even the Farwell coach stated that his Steers would advance to the next round. After the football game at Big Spring’s Memorial Stadium, they went to the local Whataburger licking their wounds and shaking their heads. All the Bronco offense had to do was score three touchdowns and the aggressive, swarming defense took care of the rest. 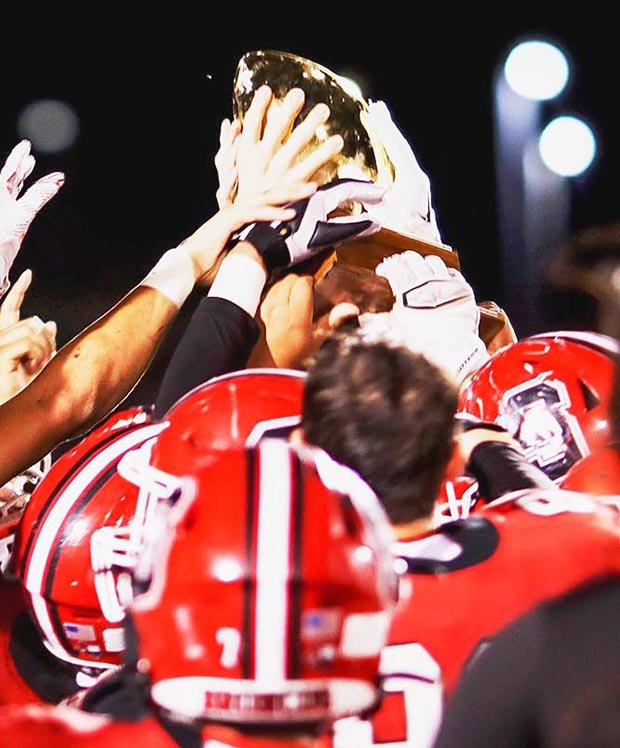 Broncos Win Bi-District in a Thriller 28-27

In what turned out to be a nail-biter in the Clyde Bulldog Stadium last Thursday night, the Broncos survived to fight on another day. Sonora defeated the fourth place Olney Cubs to win the Region 1 2A Div 1 Bi-District Championship. The Broncos came from behind and stood toe to toe with Olney for the second time in Sonora football history. Olney was not your typical fourth place team and Pigskin Preps seemed to know it would be a close game. 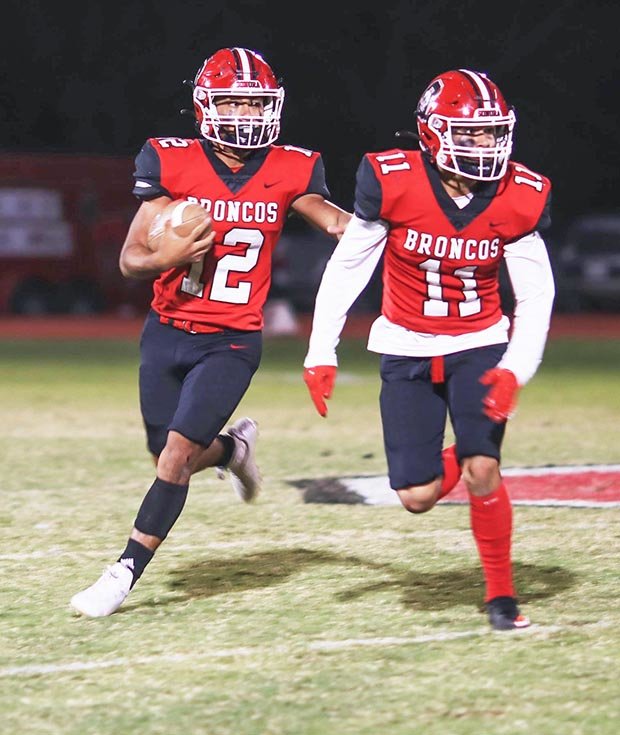 Has everybody who went to the game relaxed and caught their breath yet? Last Friday night’s game in Bronco Stadium was another one where if you missed it, you shouldn’t have. 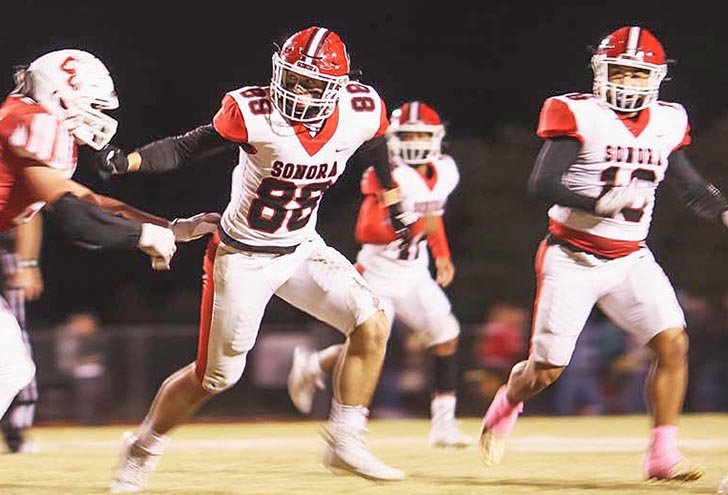 Last year the Christoval Cougars bragged on the Friday Night Football app that they were the ‘real’ big red team of Highway 277. This year there is no chat on the app, but the Sonora Broncos showed the Cougars which team was the Big Dog this year in ‘Take Three’ of the series. 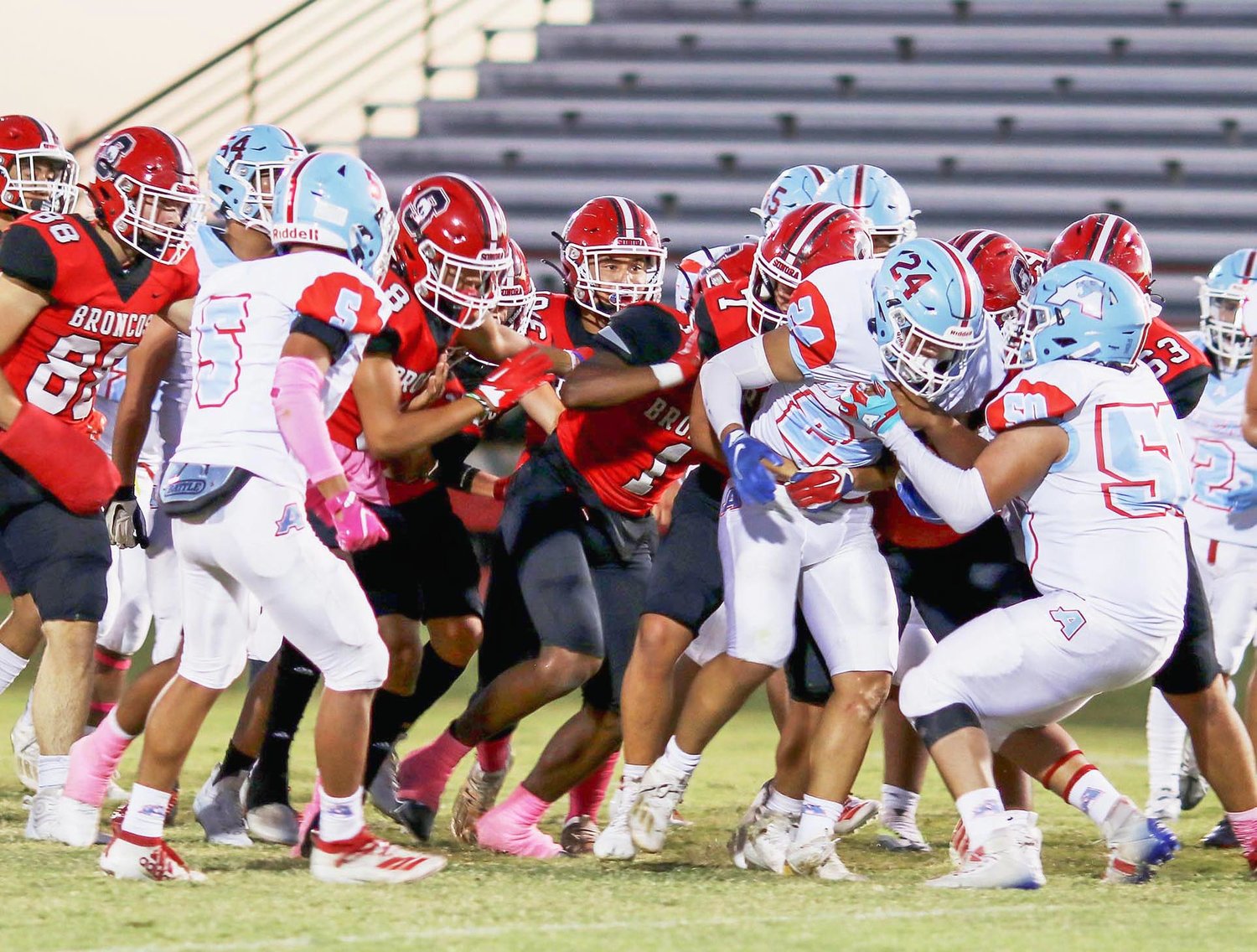 If you wanted to go to the concession stand during this game, you had to wait for halftime since there was a one-sided track meet on the turf at Bronco Stadium last Friday night. The Sonora receivers and running backs/quarterback combined for 680 yards of offense against the Wildcats - the most this season. 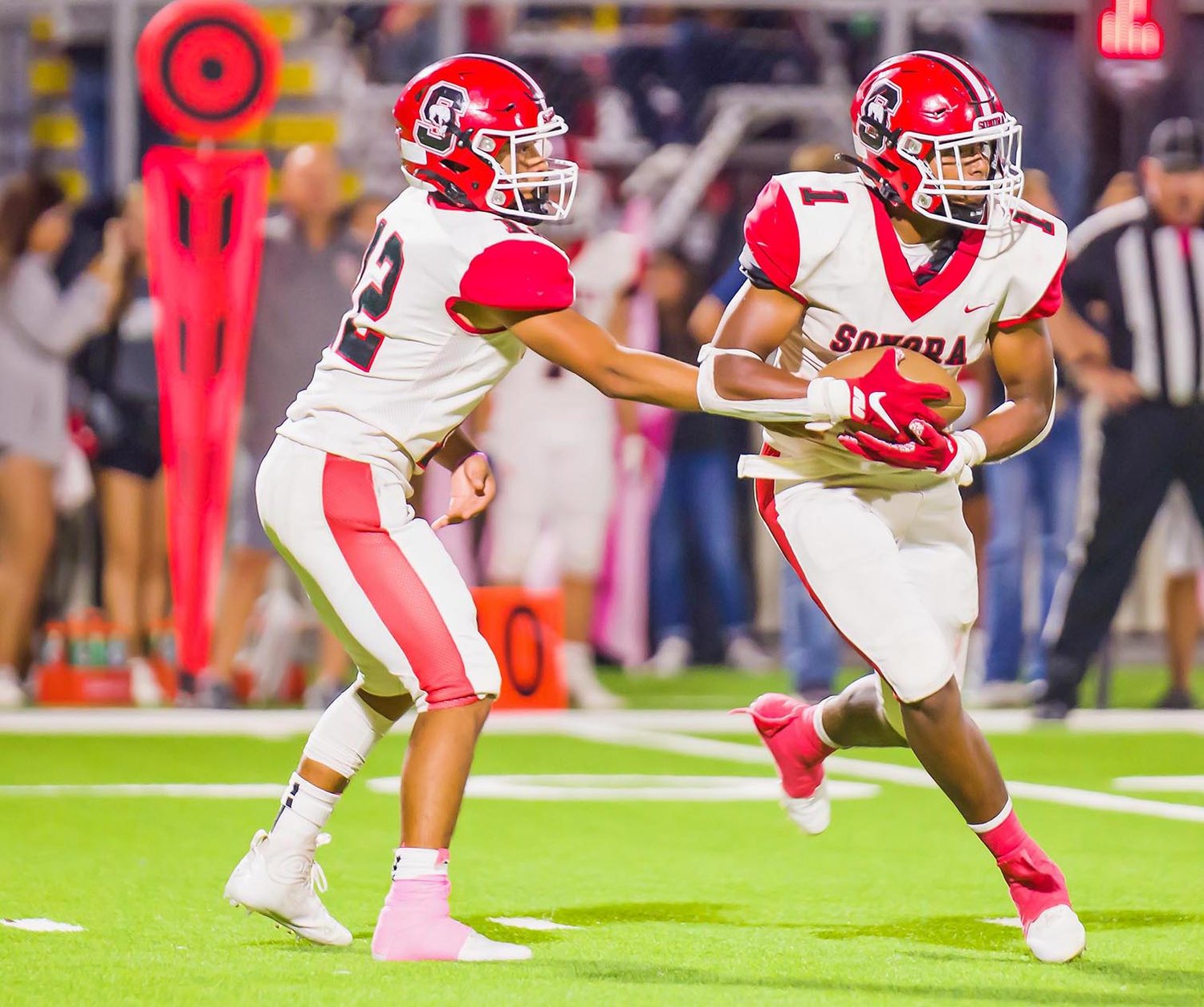 Owls Surprise Broncos on the Road

Sonora got on the scoreboard first at the halfway point of the first quarter during their second offensive series. Senior Hunter O’Banon got the four yard touchdown and Dailen Luna’s PAT kick was good with 6:28 on the clock. 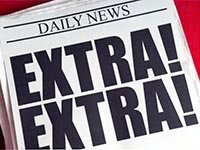 Close to 50 kids represented Sonora in the District 7-2a Cross Country meet in Ozona last week. 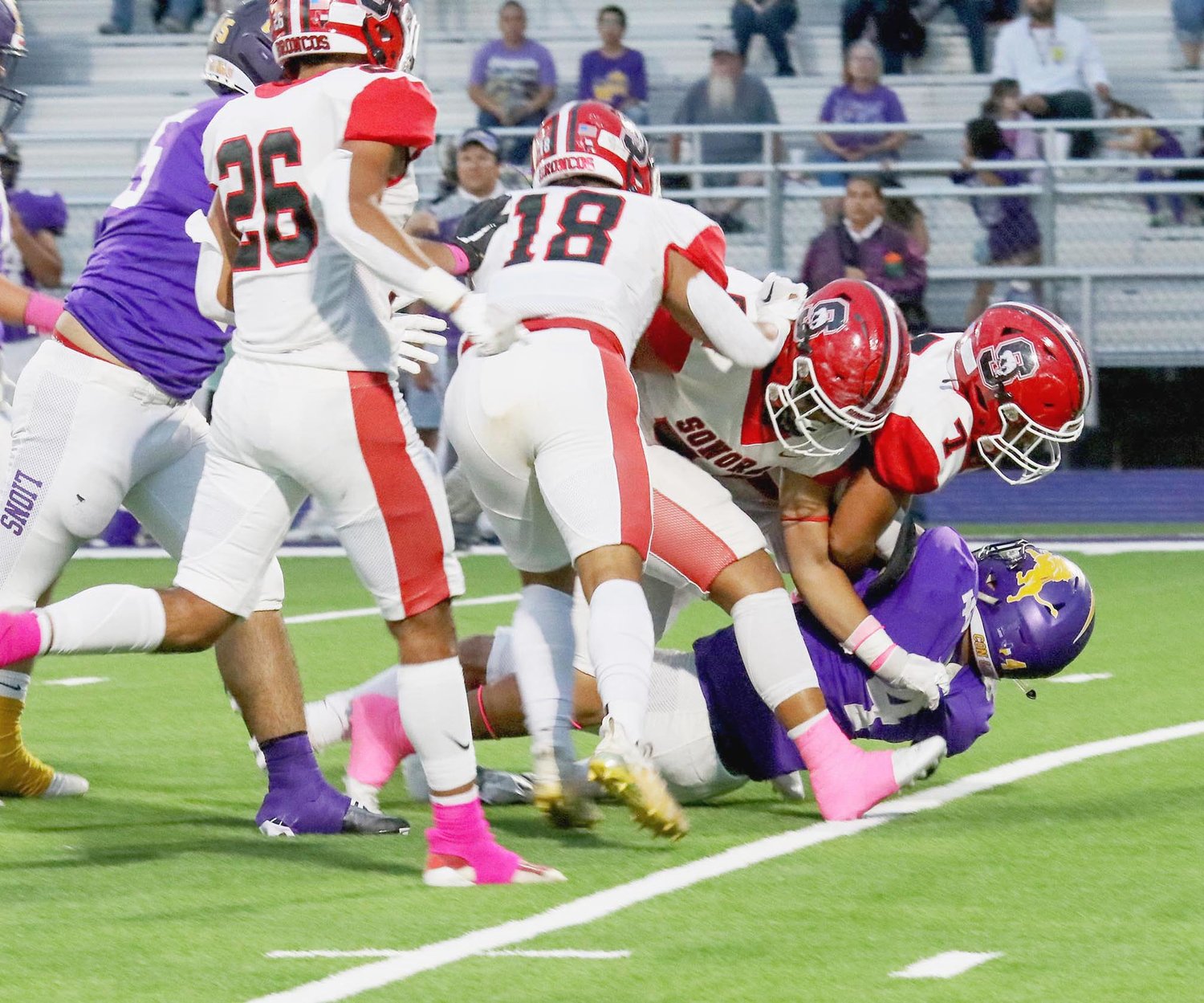 The Sonora Broncos traveled to Lions Stadium last Friday night and took an insurmountable lead early to win the 58th game in the 96 game series 38-6. In this District 3 2A Division 1 opener, the Broncos had 468 yards of offense versus the Lions’ 177 yards. The Broncos hurry up offense also tallied 65 plays to the Lions 47. 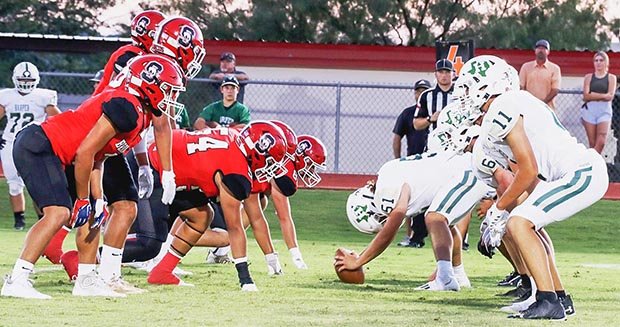 The 1-3 Harper Longhorns were the Sonora Broncos 2022 Homecoming opponent last Friday night in Bronco Stadium. The two teams last met in September 2015 with Sonora winning 48-14. This year, the Broncos put on a lightning quick display of shock and awe by scoring 48 of the 61 points in the first half of the game. 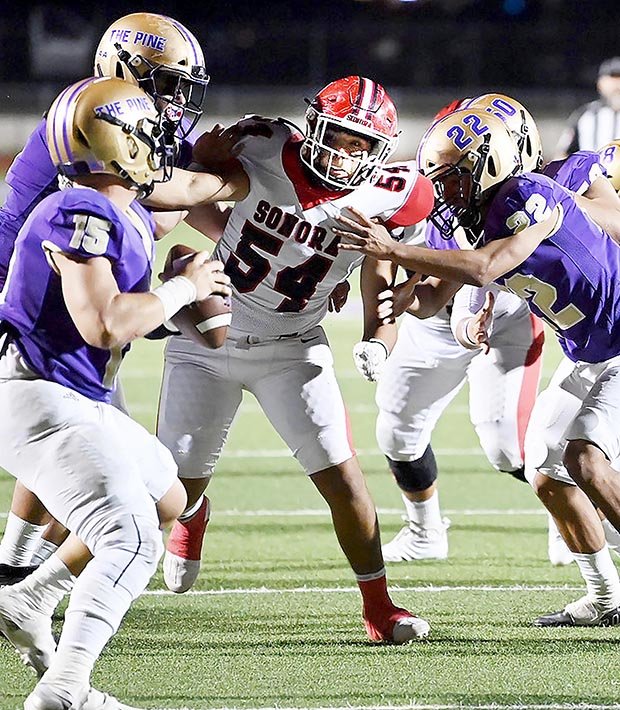 The Sonora Bronco varsity football team was on the road last Friday in Alpine ISD’s stadium and played the 3A Div 2 Alpine Bucks (0-3) for the 23rd time in football history. Last year, the Broncos defeated the Bucks 42 -19 for Sonora’s Homecoming. JV Broncos Shut Out the Eagles

The JV Broncos traveled to Eldorado as the final part of the Thursday triple header last week and “threw” their second shutout in a row. 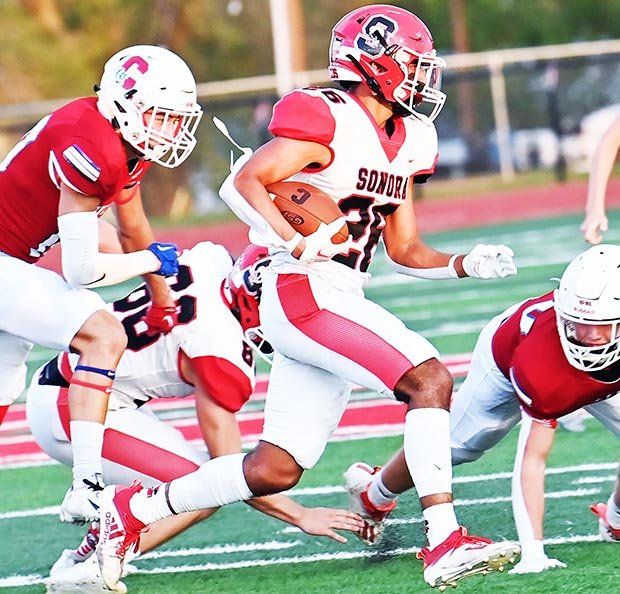 Sonora Broncos Lose the Battle of the Reds Against Coahoma

Driving into Coahoma on Friday, September 2nd, I saw a sign that touted the Coahoma Bulldogs as Big Red. The Bulldogs came out dressed out in deep red and white uniforms. They had a mission to win this game after the stinging defeat last Friday to our fellow district opponent the Forsan Buffaloes 21-13. Win it, they did by a score of 31-27. It was an electric atmosphere at Bronco Stadium for the 2022 home opener versus longtime rival the Ballinger Bearcats (3A-D2). These two rivals have played 45 times since 1923. The teams have won 22 and lost 22 times with one tie. On Saturday night, June 11, 2022, football players from across the Big Country and the Concho Valley stepped onto the field to show their talents to friends and family at Shotwell Stadium in Abilene, for the 23rd annual Greathouse FCA All-Star Classic. The mixed doubles team of Lane Taylor and Joselyn Rodriguez won 2nd place at the Region 1 Tennis Tournament in Abilene qualifying them for the State Tournament.

The Broncos baseball team and Ozona played to a 5-5 tie on Friday. Sonora was down 5-3 in the bottom of the 6th inning as Jacob Martinez crushed a homer over left field to cut the lead to one. It also started a vicious rally that won the game for the Broncos on a tie-breaker rule. Sonora won the game with more runners advancing to third base as one of the tie-breaker rules. Sonora tied things up at five when Adam Sanchez singled on a 0-1 count, scoring one run. As of Wednesday, February 2, 2022 seniors Jackson Carroll and Marcos Villalobos have signed letters of intent to continue playing football.